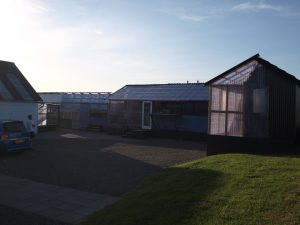 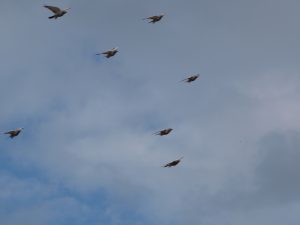 Brøbech pigeons - The structure of the stock and the breeding work

It goes without saying that results of the caliber that Anders has flown home for a number of years require good pigeon material. The basic tribe - or tribes - Anders describes as the two "Brøbech lines". There are two lines - "the blue-bred line" and "the blue line".

The "blue-bred line" originates from Anders' grandfather in Auning and is built around the main pair "88-192 A" and "93-573 U". This pair is thus on the pedigree of all four national winners of the battle, and it is precisely on these flights that the "blue-bred line" has shown its strength, because according to Anders' own statement, these pigeons are too slow on all other flights. Out of this pedigree, Anders highlights the pigeons "02-362", "01-572", "06-847" and "06-848", which in breeding have been shown to carry the genes of this pedigree in the most distinguished way.

In contrast to the "blue-bred line" created for the marathon flights, the "blue" are real all-round pigeons that can win on youth flights and sprints, but have their specialty on the 1-day long-haul flights. Crosses of the "blue-bred" and "blue line" have proven to be excellent national pilots, while the "blue" crosses on Flor Engels' pigeons have given many top pigeons at sprint and middle distances.

That the old pedigrees from 1993 are still relevant can be seen most recently in 2018, when "93-2" appears as great-grandfather of Christian Lund Andersen's great national winner at the very difficult final from Munich.

Anders has also bet on the pigeons from Flor Engels, who has dominated Danish carrier pigeon sports since the turn of the millennium. At the same time, Anders is probably also the one who has invested the most in these pigeons with a focus on purchasing very close to Engels' starting pigeons. Over the years, more than 100 pigeons from the Belgian top team have been purchased, and the purchases include: 5 direct children of "231", 7 direct children of "178", 5 children of "734" and 4 children of "Argenton". That these pigeons have also contributed on the longest flights can be seen in the form of the female "2081" who in 2014 was the national winner from Limburg - her father is the granddaughter of "Argenton".

In 2009, investments were made in pigeons from Jos De Klak, and the total purchase amounted to 30 original pigeons and 20 pigeons bred on these. Among these new pigeons were 2 direct sons after the legendary "613". The Klak pigeons are really good at speeds from 800 to 1400 mpm, and so far the greatest results with these pigeons have been achieved on land flights and very hard flights. Among other things, a regional winner from Würzburg with 50% Klak descent has fallen.

As a marathon specialist, Anders has of course also been looking for more classic long-haul pilots. Thus, van der Wegen pigeons and not least 9 original Hebberecht pigeons have also been successfully added. The latter are not good at hand, but have pretty much all bred winners - i.a. section and regional winner from Karlsruhe in 2017, and it is especially the hardness of these pigeons that is highly weighted.

Jannsen pigeons and the originals of the kind have also made a difference to the battle in Ry. It is the reds of this kind, and about these Anders says that they are impossible to add. Section winner from Giesen in 2017 was a 1-year of this pedigree, just like the regional winner from Minden and 3rd night. Freiburg has its roots in this lineage.

Of the classic long-haul category, Jan Arden pigeons were most recently added, where in 2014 30 pieces were purchased and a further 20 pieces in 2016 - along lines concentrated on the legendary "Dolle". In 2017, a section winner from Antwerp fell, which is a cross between one of these Arden pigeons and the previously mentioned Hebberecht pigeons.

As with everything else that has to do with pigeons, Anders is very ambitious and dynamic and therefore experiments are constantly taking place in the breeding work to a greater or lesser extent. That is why Geerinckx pigeons have also been purchased via Flemming Friis, and the 5 original pigeons have bred fantastically on Anders' battle - and are otherwise distinguished by an absolutely excellent physique.

There is a clear strategy in the breeding work - top fliers are always bred by crossbreeding, and as Anders says: "Life is too short to fly with purebred pigeons". It is Anders' opinion that crosses, regardless of pedigree, can be done at all distances. The concept in the breeding work is based on bone-hard selection based on the motto "breed many - try many - remove many". Already at weaning, 5 percent of the pups are sorted out, and this proportion of "discarded" pups becomes smaller and smaller over time, as the best pigeons have been selected for a number of years. In parallel with this cross-breeding, a number of inbreeding is also conducted with a view to further breeding. The inbred pigeons are subject to an even harder sorting if possible, which in Anders' opinion is strictly necessary. These pups are also sorted from the age of 30 days, where they are released into an open aviary for 2 months. During this period, 25% is discarded and after another 2 months, another 10-15% is removed.